My Potato Fritter Recipe I show you today in this post. The popular potato dish German Reibekuchen is known regionally under different names.

The Swiss prepares a Rösti, common names are potato pancakes or buffers.

The potato pancake tastes great as a simple fasting dish, sprinkled with cinnamon and sugar and served with apple compote. Also in combination with herb quark or chive sauce.

In fine restaurants the Rösti, more or less thick or thinly prepared, is a popular side dish with smoked salmon or pickled salmon.

In this article I will show you how to prepare potato pancakes step by step with many photos. My original grandma buffer gets along without flour and egg, is gluten-free, digestible and healthy. Just try it now and enjoy.

1. Make your own potato pancakes from raw potatoes

The potato pancake ingredients are raw potatoes, salt, pepper and nutmeg. For frying you need a heat-resistant sunflower oil. The potato pancakes can be prepared in a few minutes, a little manual work is called for, it goes very quickly. Here the step by step kitchen story and pictures:

Which potatoes are best suited for Reibekuchen? Answer: Predominantly waxy potatoes are the best, potato pancakes are also successful with other potato varieties. 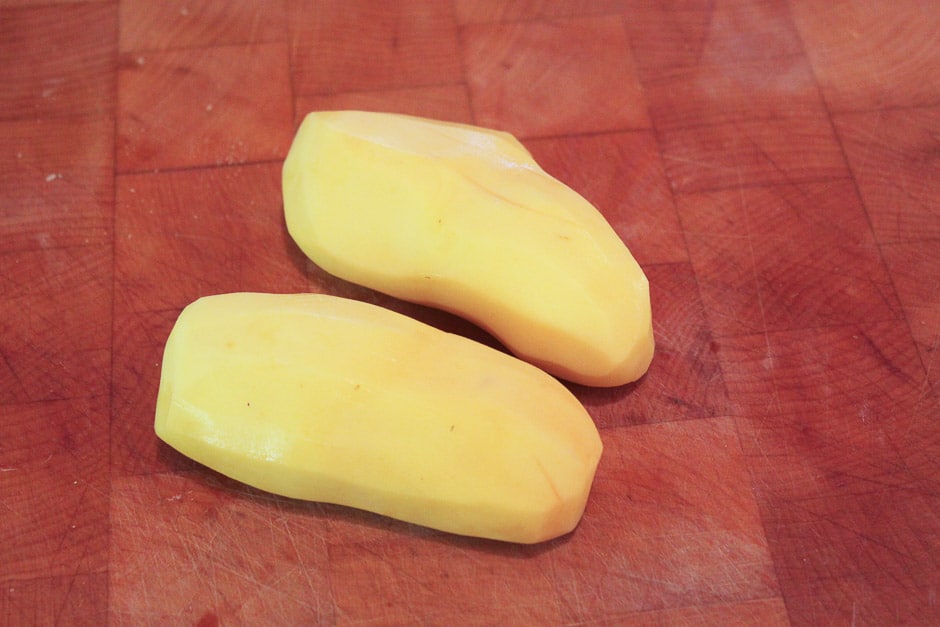 Wash and peel the potatoes, if you are preparing large quantities of potato pancakes please put the peeled potatoes in cold water so that they do not turn brown. Chef geniuses choose the big potatoes for potato pancakes – that means less work! 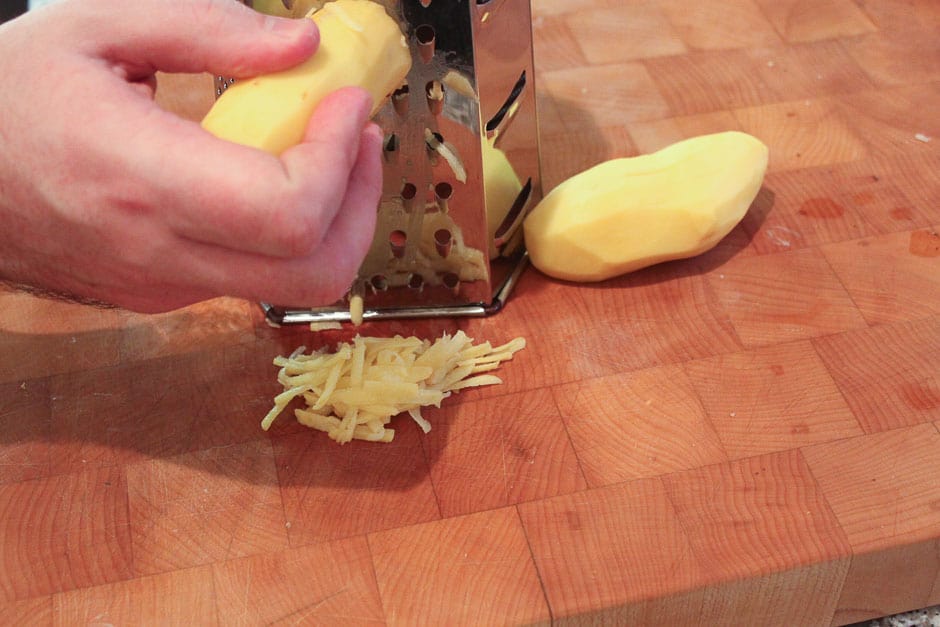 Next, roughly grate the potatoes with the kitchen grater. 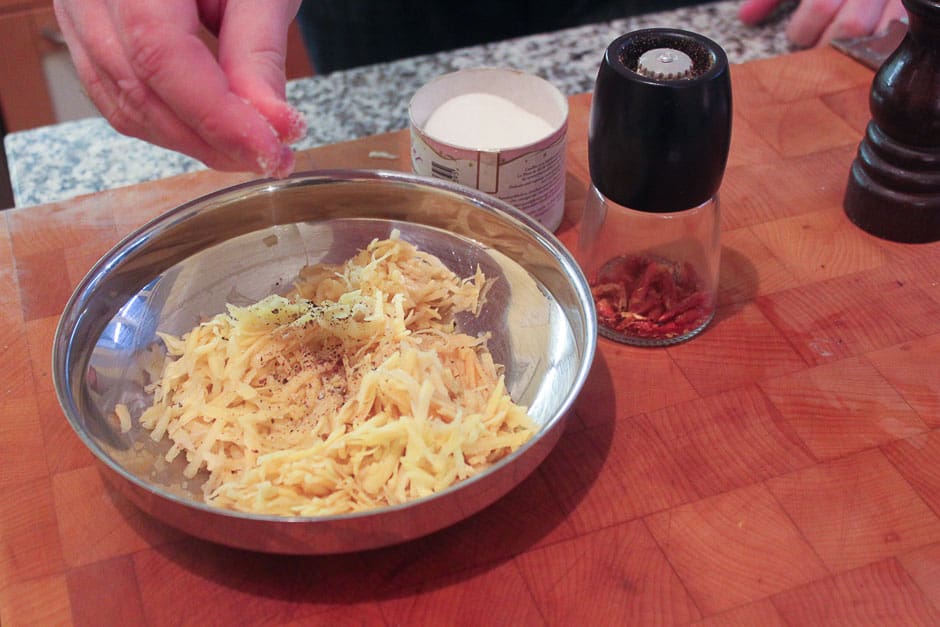 Season the grated potatoes with salt, pepper and freshly grated nutmeg. Optional for the hearty buffer-version add some ground caraway, caraway is not suitable for the sweet buffer-version with cinnamon and sugar! 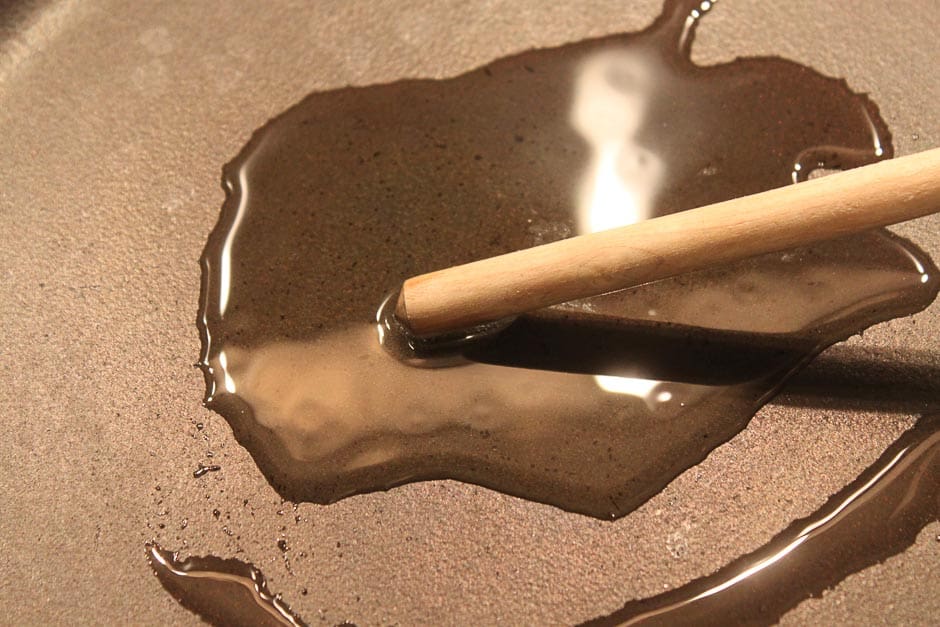 Heat a coated pan with some sunflower oil. The oil is hot enough when small bubbles appear on the handle of a wooden spoon as it is dipped into the oil.

Pour the prepared potato mixture into the pan, be careful, the fat splashes a little.

Classic potato pancakes or potato pancakes taste sprinkled with sugar and cinnamon, served with apple compote, with herb quark or salmon quark as side dishes. In the recipe below I show a vegetarian variant with chive sauce and vegetables.

The recipe comes from my first cookbook: “Der Minutenkoch – schmeckt. schneller” (The minute cook – tastes faster) – I have changed it slightly since then and adapted it a little. Please write comments and questions about the recipe using the comment function further down on the page…

Hi, I am a German Chef, Cookbook Author and Food Photographer. The imparting of cooking knowledge is my great passion. Everyone can cook for himself and with this website I would like to contribute to its success. Let yourself be inspired and enjoy good food. If you have any cooking questions, please use the comment function at the end of each article and recipe. I wish Thomas Sixt Good Luck!