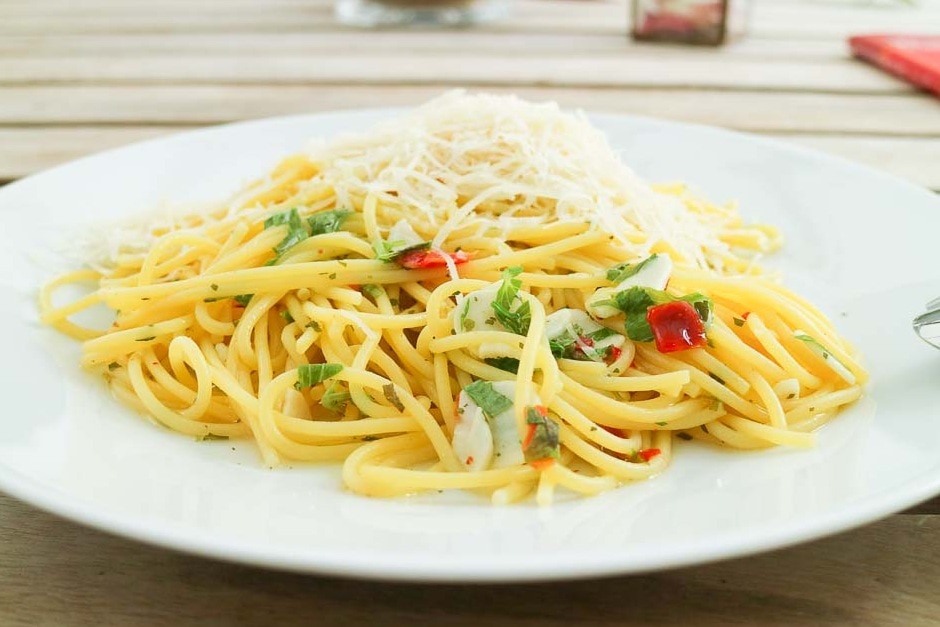 The recipe Spaghetti Aglio e Olio  is a well-known pasta classic of Italian cuisine. The spaghetti with garlic gets additional spiciness from peperoncino and delights the cook and guests.

The finely grated Parmesan reduces the strong taste of garlic and chilli.

My simple recipe is inspired by a cooking colleague from Milan with whom I visited common cooking stations.

I would be happy if you share the recipe on Facebook and Pinterest and wish you every success with this simple and delicious spaghetti with garlic recipe.

I love this dish and if you want to prepare shrimps for the spaghetti aglio e olio, I recommend you to make King Drawns as large as possible, which you either roast whole or fried and then sliced on the spaghetti. I consider shrimps and other small shrimps unsuitable because they dry quickly. 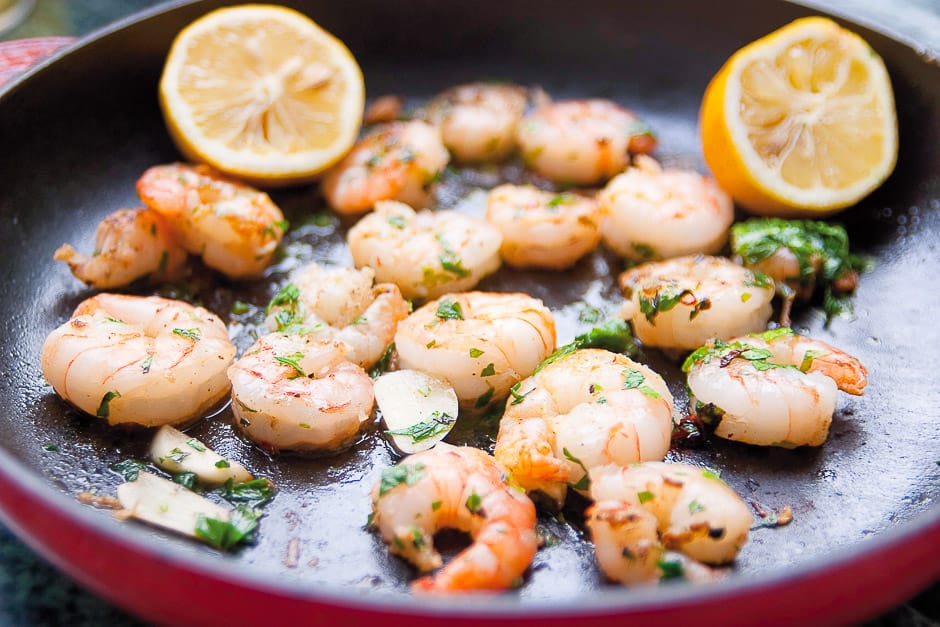 To fry the prawns you need high heat, always preheat the pan well. Coated pan or iron pan, that remains a matter of philosophy and equipment in the own kitchen.

You can also finish our aglio e olio pasta with lobster. Cook the lobster for it and release, sweat the lobster meat in butter before serving and flambé with cognac and lay directly on the spaghetti.

…are simply prepared and consist of few ingredients. If possible, please use young, green garlic. In addition the best olive oil which comes to you tastefully under the tongue. Don’t save money on Parmesan and have a mature one. With spaghetti, you can switch to linguine, which is a flattened spaghetti variety on which the sauce sticks better. Enhancement: Pasta di bronzo is industrially produced pasta in which the pasta dough is pressed through a special metal nozzle. The pasta does not become as smooth as when it is formed with a Teflon nozzle. Pasta rough, more taste at the noodle…

When preparing with olive oil, garlic and chilli you can add an anchovy fillet, finely chopped. The anchovy fillet should melt in the heat and thus contribute to the taste. You can easily stretch the garlic chili oil with some white wine (50 ml) and vegetable broth or chicken broth (100 ml). The spaghetti aglio, olio e peperoncino are then not quite as "oily" and taste lighter.

Hi, I am a German Chef, Cookbook Author and Food Photographer. The imparting of cooking knowledge is my great passion. Everyone can cook for himself and with this website I would like to contribute to its success. Let yourself be inspired and enjoy good food. If you have any cooking questions, please use the comment function at the end of each article and recipe. I wish Thomas Sixt Good Luck!