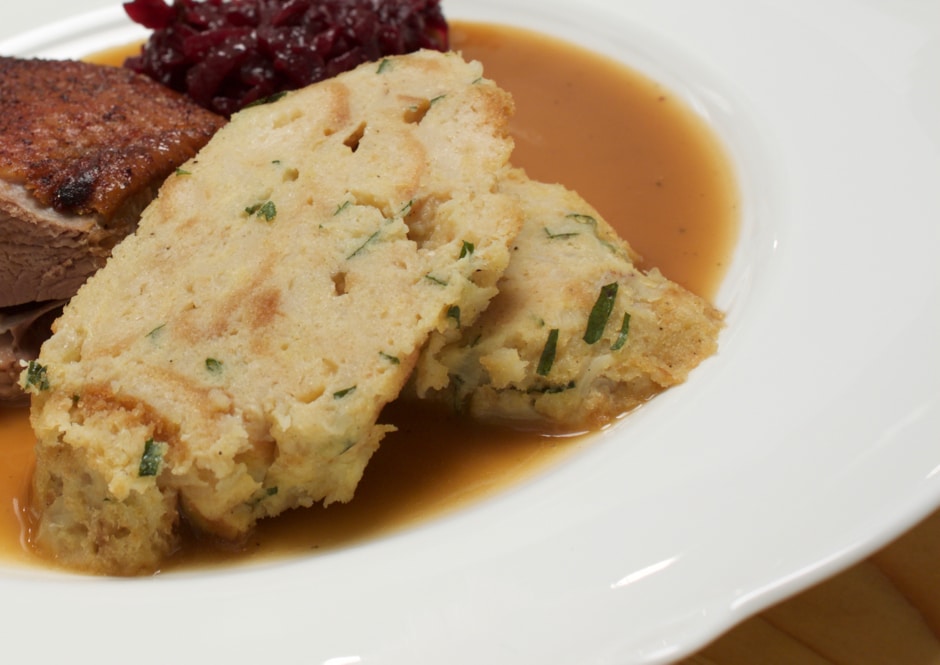 Making napkin dumplings yourself, this article with my Napkin Dumpling recipe shows you a great overview of how to prepare the delicious dumplings.

In the cooking video “Preparing Napkin Dumplings”  you can follow everything step by step.

Napkin dumplings in the foil … in the aluminium foil … or prepare it in the cloth napkin? You will find an overview of all variants and advantages here!

I wish you good luck! I am happy if you share this article on Facebook with your friends.

1. Make your own Napkin Dumplings

You can make your chef napkin dumplings absolutely by yourself. How to get the dumplings in star quality on the table, stress-free, that’s what this article is about. First of all I would like to deal with the possibilities of wrapping and explain to you the different variants with cling film, aluminium foil and traditionally with cloth napkin including advantages and disadvantages.

Wrap the ready-prepared dumpling mass in cling film, close the ends tightly and, if necessary, tie with a string. The dumplings are placed in boiling water or cooked in steam over boiling water. It is important that you wrap the dumpling sausage with foil so that the dumpling does not burst when cooking!

Advantages dumplings in the aluminum foil prepare at a glance:

Important: Remove cooked dumplings from aluminium foil and repack them for storage or freezing in transparent film.

The next day you can fry the remaining dumplings cut into slices in a pan or prepare a delicious dumpling gröstel! Food picture ©Thomas Sixt

This is the traditional way of preparation: you need a clean towel, the towel should be boiled in boiling water beforehand and soaked several times to remove detergent residues and softener aromas. Wrap the dumpling in the cloth and tie the ends with a string. The dumpling is then placed in boiling salted water and cooked. I make my dumplings rarely in the cloth, if only the Bohemian dumplings (with yeast dough), bread dumplings can stick badly to the cloth. I think the preparation in the foil is more contemporary and practical.

The cooking time of the wrapped dumplings is 30-45 minutes, depending on the thickness. If you prepare the dumplings floating in water (in tea towel or cloth) please salt the water well. When preparing in the foil, it is not necessary to salt the cooking water or even the steam water. Cooking over boiling water in steam is a good alternative, but does not reduce the cooking time. You can also steam the dumplings in a steam cooker at 100°C, the Thermomix offers a similar possibility with the steam attachment.

Important: Place the dumplings in the boiling water, then let them gently soak in the water!

The preparation of the pretzel dumplings is like the bread dumpling shown above. Instead of bread rolls cubes of pretzel sticks are used. For the recipe I like to use the original recipe from Alfons Schuhbeck, learned in 1993 during my apprenticeship in Waging am See. Two large onions are finely diced and sweated for 10 minutes in a pack of colourless butter. Add a litre of milk, bring to the boil and season with salt, pepper (white), nutmeg. Pour the milk and onion mixture over 1 kg of pretzel stick cubes and leave to stand for 15 minutes. Beat ten eggs and mix, add to the dumpling mixture and mix. After another 15 minutes, add a good handful of finely chopped parsley to the dumpling mixture and season to taste again. Wrap the pretzel dumpling in buttered aluminium foil and cook in steam for 45 minutes. Then unwrap the dumplings from the aluminium foil and wrap them freshly in cling film. The dumplings were always freshly prepared in the morning for the lunch service and in the afternoon for the evening service and not cold. Only a warm dumpling is beautifully fluffy and unbeatable in taste. The dumplings at Alfons Schuhbeck were then cut into oblique slices and served fried in butter on both sides.

Bohemian dumplings are prepared with yeast dough: Place one kilogram of flour in a mixing bowl, add three eggs, salt and pepper. Next, mix 300 ml lukewarm milk with 1/2 teaspoon sugar and a packet of yeast and leave to stand for 10 minutes. Then add the milk to the flour and knead a smooth dough with the kneading hooks of the mixer. Let the dough rise in a warm place (oven 30 °C) for at least one hour. Wrap the yeast dough in foil or a prepared cloth and cook in a water bath for 30 minutes. Cut the yeast dumplings into slices with a knife or thread.